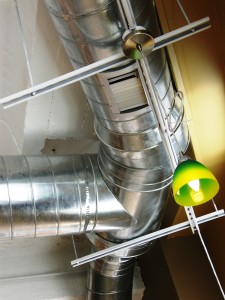 In a recent case, the Louisiana Second Circuit Court of Appeal affirmed a judgment by the Workers’ Compensation Judge, affirming the decision in favor of an employee who had been injured in a work-related accident.

In this case, the plaintiff, Ms. Buchanan, was installing duct work on a university campus, wrapping insulation around a 10-inch duct. When an anchor suspending the duct failed, the duct fell slightly and struck Ms. Buchanan’s shoulder. There is a dispute regarding whether Ms. Buchanan experienced immediate pain. She claims that she did suffer pain, while a witness and co-worker stated she did not complain to him, nor did he see her wince or flinch from the pain.

After the accident, Ms. Buchanan contacted her employer, notifying them of her injury. Ms. Buchanan refused medical treatment, and at trial, she testified that her employer told her she was an independent contractor and not qualified for workers’ compensation benefits. Her employers deny this statement.

During trial, the employer presented the testimony of a doctor skilled in biomechanics. He inspected the scene of the accident, weighed the duct, measured the height of Ms. Buchanan on the scaffold, and found that the force of the falling duct was insufficient to cause an injury to her shoulder or neck.

On appeal, the question before the court was whether the falling duct caused Ms. Buchanan’s injury. Additionally, the appeals court was to determine whether Ms. Buchanan committed fraud in pursuit of her claim for compensation, and whether the WCJ erred in the award of penalties and attorney fees.

The case centered on the credibility of the employee, Ms. Buchanan. The appellate court stated that the standard upon appeal is manifest error. In other words, the court asks whether the WCJ’s findings and conclusions are reasonably supported by the record.

The employer argued that the experts did not offer the opinion that the falling duct caused enough force to injure Ms. Buchanan. The court of appeals agreed, but it stated that the WCJ gave credible weight to the testimony of Dr. Gunderson and Dr. Foster. Dr. Gunderson stated that Ms. Buchanan’s reaction to the falling duct could have caused her injury, while Dr. Foster stated he could not rule it out.

Regarding the allegation that Ms. Buchanan made false statements to obtain workers’ compensation benefits, the court turned to the Louisiana law, which sets forth criminal sanctions and a forfeiture of benefits for willfully making false statements or representations in order to obtain or defeat a workers’ compensation claim.  Here, the court reviewed Ms. Buchanan’s treatment and the testimony of her doctors, with the purpose of determining which injuries were related to her shoulder and which injuries were related to her neck.

The court stated that Ms. Buchanan could have believed that her neck was not the source of her problems, since she relied upon the doctor’s findings that she did not have grave concerns regarding her neck. The court also stated that Ms. Buchanan’s testimony was deemed credible and that the WCJ’s credibility determination is given great deference under the standard of review.

The court did note that Ms. Buchanan’s procrastination in seeking medical treatment might cast doubt on her complaint. But they also stated that she documented the accident scene and that in many cases the employee fails to undertake this documentation, leaving open the question of whether an incident truly took place.

In conclusion, the court stated that Dr. Gunderson’s medical opinion, the evidence of injury contained in the MRI, and the findings of the court-appointed independent medical examiner that Ms. Buchanan was not at maximum medical improvement supported the credibility determination by the WCJ.

The court did not find manifest error in the WCJ’s finding and affirmed the judgment in favor of Ms. Buchanan.

At the Lavis Law Firm, we represent clients in workers’ compensation claims, helping to secure payment for injuries regardless of the fault of the employer or employee. Contact our office today at 866.558.9151.