In a recent case before the Louisiana Court of Appeal, Third Circuit, the court addressed whether a plaintiff had met his burden of showing a genuine issue of material fact existed at trial.  Since the defendants had moved for summary judgment, Louisiana law required the plaintiff to show there remained a material fact in dispute regarding their liability. 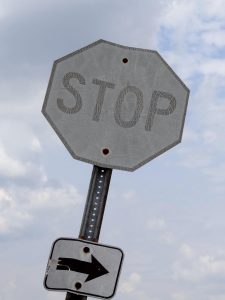 In this particular case, the issue was whether the defendants had notice of a twisted or bent stop sign at an intersection.  The plaintiff contended that due to the failed stop sign, he drove into a ditch and suffered injuries and damage to his vehicle.

Ronnie Myers was driving his vehicle north on Charlene Road, in a heavy fog.  He was unfamiliar with Charlene Road and did not know that it came to a “T” intersection at Prudhomme, requiring him to stop and turn either left or right.   At the time of the accident, the stop sign that would normally have faced Charlene Road and have warned Mr. Myers of the intersection, and the need to stop his vehicle, was down or twisted. Mr. Myers could not see the stop sign, and he drove his vehicle across Prudhomme Road and into the adjoining ditch.  He allegedly suffered injuries and property damage.

Mr. Myers brought a lawsuit against the Acadia Parish Policy Jury (APPJ) and the State of Louisiana, through the Department of Transportation and Development (DOTD).  He sought personal injury and property damages, on the grounds that both APPJ and DOTD failed in their duty to properly maintain the stop sign.  Both defendants moved for summary judgment, and after a hearing, the court found that APPJ did not have custody and control of the stop sign.  APPJ was dismissed with prejudice.  The trial court found that DOTD had custody and control of the sign, but it did not have notice of any alleged problem with the sign.  DOTD was dismissed with prejudice as well.

Mr. Myers appealed the judgment dismissing the two defendants, arguing it was error to grant summary judgment to both APPJ and DOTD. Alternatively, Mr. Myers claimed that he was not allowed to complete his discovery to oppose their summary judgment motions.

On appeal, the court stated that Louisiana law requires that the trial court must only consider evidence admitted for the summary judgment motion.  In this case, all the documents the trial court considered in this case were attached to the memorandum submitted in support of the motions for summary judgment.  Opposing the motion for summary judgment requires that the adverse party set forth specific facts showing a genuine issue for trial.  Those facts are considered material when they are essential to the plaintiff’s cause of action under their theory of recovery.

The substantive law governing the litigation determines whether a fact is material. Under Louisiana law, an owner or custodian of a thing is responsible for damage caused by that thing if it is shown that they knew or should have known of the defect causing the damage, and that the damage could have been prevented through reasonable care.   Here, Mr. Myers was required to establish:  1) the defendant had custody of the thing causing his injuries; 2) the thing was defective and created an unreasonable risk of harm; 3) the defendant knew of the defect and did not correct it within a reasonable time; and 4) the defect caused his injuries.

Regarding APPJ’s motion for summary judgment, the defendant submitted the affidavit of the road manager for APPJ, establishing that custody and control of the stop sign was the responsibility of DOTD.  Since Mr. Myers was unable to dispute that APPJ did not have the required custody and control of the stop sign that allegedly caused his damages, the appellate court stated that he had not met the first of the four elements necessary to prove his claims against APPJ at trial. The court affirmed the lower court’s granting of summary judgment on behalf of APPJ.

Regarding the summary judgment in favor of DOTD, the lower court found that Mr. Myers had not shown DOTD had notice – actual or constructive – of the defect in the stop sign.

The appellate court stated that DOTD made a prima facie showing that its summary judgment motion should be granted based on lack of notice.   They submitted affidavits and testimony in support of their position that they had not been on notice the stop sign needed repair.  A Work Request Report was received after Mr. Myers’ accident, and the deputy patrolling the area stated that he had not previously noticed anything wrong with the stop sign at that intersection.

At that point, the burden shifted to Mr. Myers, and according to Louisiana law, if the party opposing the summary judgment does not establish that he can satisfy his evidentiary burden of proof at trial, there is no issue of material fact.

Mr. Myers submitted the affidavit of a property owner across the road from the stop sign, who stated prior accidents had occurred at the intersection.

The appellate court stated this affidavit did not differ in testimony from that offered by DOTD in support of their motion for summary judgment.  All the parties agreed the sign was bent, twisted in the wrong direction, or down.  Since any of these defects would result in the stop sign being useless to Mr. Myers at the intersection, they did not create a genuine issue for trial regarding the issue of the defective condition of the sign.

To show constructive notice means that there are facts that lead to an inference of actual knowledge.  The court stated that a public entity is deemed to have constructive notice if the defect existed for so long that it should have been reasonably discovered.  The affidavit of the property owner in support of Mr. Myers’ position did not create a genuine issue of material fact regarding “constructive notice.”  It did show there may have been other accidents at the intersection.  It did not state that the property owner observed the stop sign’s condition before Mr. Myers’ accident, such that DOTD should have reasonably discovered it.

Mr. Myers had not presented other documents or factual support to contradict the affidavit presented by DOTD, showing they did not know of the problem with the stop sign until after Mr. Myers’ accident.

The appellate court stated that DOTD did not have actual or constructive notice of the defect prior to Mr. Myers’ accident.  The trial court’s ruling was adequately supported by the summary judgment evidence, and the general statements in the evidence presented by Mr. Myers were not enough to create a genuine issue of material fact at trial.

In conclusion, the court affirmed the trial court’s granting of the summary judgment motions of the Acadia Parish Policy Jury and the State of Louisiana, through the Department of Transportation and Development.

At Lavis Law, our personal injury attorneys help Louisiana victims of car accidents, providing guidance and legal representation as they assert claims for compensation. If you or a loved one has suffered injuries due to a negligent driver, contact our office for a free consultation. We can be reached by calling 866-558-9151 or using our online form.