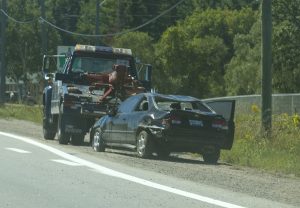 In this multi-vehicle collision case before the Louisiana Third Circuit, the court reviewed the trial court’s summary judgment adjudication in favor of the defendant insurance company, holding that the plaintiff’s insurance policy did not provide uninsured/underinsured motorist coverage.  The appellate court reviewed the policy, stating that the role of the judiciary is to interpret the contract to effectuate the parties’ intent.  At issue in this particular case was whether the limitation within the general liability coverage extended to the uninsured/underinsured motorist coverage.

Plaintiff Danny Castille drove a tractor/trailer westbound on Interstate 10 in Kenner directly behind defendant Denise Breaux.  A truck operated by Defendant Jonathan Blum was in front of Ms. Breaux.  According to Mr. Castille,  a ladder in the back of Mr. Blum’s truck fell into the path of Ms. Breaux’s vehicle.  Mr. Castille alleged that Ms. Breaux attempted to avoid the ladder and a collision took place between Ms. Breaux’s vehicle and his own vehicle.

Together with his wife, Mr. Castille brought a lawsuit against Ms. Breaux and her automobile liability insurer, as well as Mr. Blum and his insurer.  Later, the Castilles added Certain Underwriters as a defendant, seeking uninsured/underinsured motorist (UM/UIM) coverage under a policy issued to Mr. Castille.

Certain Underwriters moved for summary judgment, and the trial court ruled in their favor, dismissing the Castilles’ claim.

The appellate court stated that they conduct a de novo reviewing of the record, and remain mindful of the requirement that general rules of contract interpretation apply when reviewing an insurance policy.  It is the role of the judiciary, they made clear, to ascertain the common intent of the parties to the contract.

The lower court found that UM/UIM coverage was unavailable to the Castilles. They relied on a section of the policy entitled “Bobtail Liability Insurance Policy.”  But the appellate court reviewed the UM/UIM endorsement attached to the policy, and held that the endorsement stated it “change[d]” the policy.  The court stated that coverage under the liability portion of the insurance policy referred to an entirely different loss than UM/UIM coverage.

Further, the court stated the liability policy made clear that UM/UIM coverage was to be provided, as defined by the endorsement, attached to the policy.  It was therefore necessary to look to the attached endorsement when determining whether UM/UIM coverage existed.

The court stated that the UM/UIM coverage had been modified to cover “all sums” that the insured individual was legally entitled to recover from the driver of an uninsured motor vehicle.

At Lavis Law, our motor vehicle collision attorneys provide legal representation and advice to Louisiana car accident victims.  If you or a loved one has suffered injuries due to a negligent driver, contact our office for a free consultation. We can be reached by calling 866-558-9151 or using our online form.