Recently, in an appeal from the Office of Workers’ Compensation (OWC), the court analyzed a decision in favor of an injured employee who did not immediately report his injury to his employer.  The employer argued that the employee did not meet his burden of proving that an accident occurred on the 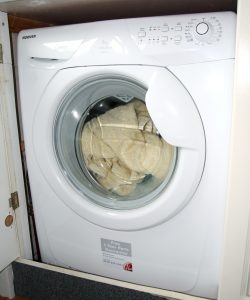 job and that his evidence was not corroborated.

James Payton worked for Sears, Roebuck and Co. (Sears) as an appliance technician.  While in the course and scope of his employment, lifting a washer/dryer in the laundry room of a home, he suffered a back injury. Mr. Payton filed a Form 1008 Disputed Claim for Compensation in the Office of Workers’ Compensation.

Mr. Payton testified that he did not report his injury to his supervisor immediately because he was awaiting medical confirmation that his back injury was work-related.  He also stated he had not been advised of the rules regarding filing a workers’ compensation claim.

Following trial, the OWC judge rendered judgment and found that Mr. Payton met his burden of proof regarding his accident, injury, and disability.  Sears was ordered to pay benefits and ongoing temporary total disability benefits from the date of the trial and forward.   The judge also ordered Sears to pay past due medical bills and authorize all medically necessary and related medical future treatments.  Sears was also ordered to pay $4,000.00 in penalties and $4,000.00 in attorney’s fees for its unreasonable refusal to pay benefits and for its denial of medical treatment.

Sears argued that Mr. Payton did not meet his burden of proof that an accident occurred on the job.  Sears alleged that Mr. Payton’s version of events had not been corroborated and that other evidence undermined his allegations.

On appeal, the court stated their standard:  manifest error.  Here, the workers’ compensation claimant must prove a personal injury by accident arising out of and in the course of employment. The rule is that an injured employee may prove their injury by testimony alone if no other evidence discredits or casts doubt on their version of events, and the testimony is corroborated by circumstances after the incident.

The appellate court stated that Sears allegedly refused to pay benefits because Mr. Payton did not report the accident immediately following his injury.  Mr. Payton made clear his delay was to ensure that his injury was work-related. He also had not been informed of how and when to file a workers’ compensation claim.  The court stated that Mr. Payton’s delay in reporting the accident to Sears does not discredit his story, particularly given his explanation of why he did not immediately report the accident.  Since no credible evidence cast doubt on Mr. Payton’s version of the incident, and medical evidence corroborated his testimony that he did suffer a work-related injury, the appellate court stated the OWC judge did not err in finding Mr. Payton met his burden of proof.

Regarding the award of penalties and attorney’s fees to Mr. Payton, the court stated that when an employer refuses to pay benefits, Louisiana law requires a “reasonably controverted” standard. If the claim is reasonably controverted, the employer may not be assessed penalties and attorney’s fees. Otherwise, medical benefits are to be paid within 60 days after the employer has received written notice of them.

Here, Mr. Payton reported his work-related injury, and at the time of trial, there was no dispute that Sears had not authorized medical treatment on his behalf.  The appellate court stated that there was no evidence that Sears did not reasonably controvert Mr. Payton’s claim of a work-related accident.  In this case, there was no evidence that the non-payment of medical benefits resulted from conditions out of Sears’ control. Therefore, the court found the $4,000 in penalties and the $4,000 in attorney’s fees for failing to pay benefits were not in error.

The court affirmed the OWC judgment in favor of Mr. Payton.

At Lavis Law, our workers’ compensation lawyers help injured individuals in Louisiana pursue compensation for their injuries.  We offer personal attention and diligent representation, and we provide a free consultation. Our office can be reached by calling 866.558.9151.