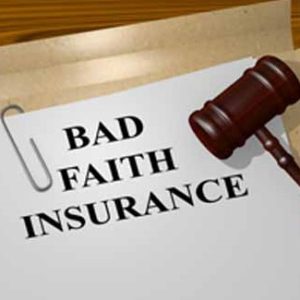 Louisiana Supreme Court has noted that both statutes incorporate the same standard and proscribe the same conduct.   The cases interpreting the two provisions are used them interchangeably.

WHAT YOU NEED TO PROVE-  In order to recover the statutory penalties, a claimant must:

The bad faith statutes are penal in nature and should be strictly construed.  The sanctions of penalties and attorney fees are not assessed unless a plaintiff’s proof is clear that the insurer was, in fact, arbitrary, capricious, or without probable cause in refusing to pay.

In bad faith actions, the insured is seeking extra-contractual damages, as well as punitive damages. Therefore, the insured’s burden is great. The court should impose penalties only when the facts negate probable cause for nonpayment.

The statutes penalize an insurer whose willful refusal of a claim is not based on a good-faith defense. While an insurer cannot “stonewall” the insured because she cannot show her exact amount of damage, the insurer is not required by the bad faith statutes to pay all of the insured’s claim within the statutory period to avoid penalties.

If the extent of loss is contested, the insurer need only tender the “undisputed portion” of the claim, or “the reasonable amount which is due.” This means the insurer must pay the insured “a figure over which reasonable minds could not differ” within the statutory period.

“A refusal to pay the full amount claimed will not be arbitrary and capricious when the dispute had a good faith basis.” For example, one court found there is no bad faith when the insured and the insurer engaged in continuing negotiation over the value of the loss following Hurricane Katrina, and the insurer continued to respond promptly to the insured’s inquiries.

If you need help with your Louisiana Bad Faith Insurance Claim, call me at 866-558-9151 or submit your inquiry online. Please be advised that you may be facing important legal deadlines, so don’t delay.

“first and foremost, I would like to thank Mr. lavis and his law firm employees for an experience that can be remembered. Mr. lavis and his co workers showed my family the concern and compassion to our needs. they understood our struggle and helped us along the way. when we needed our questions to be answered they answered with no hesitation or fear. I would definitely recommend this Mr. lavis and law firm to anyone. thanks so much Mrs. imam”

LA-R.S. 22:1892, Payment and adjustment of claims, policies other than life and health and accident; personal vehicle damage claims; extension of time to respond to claims during emergency or disaster; penalties; arson-related claims suspension