The Atchafalaya River flows along the banks of Morgan City and serves as an outlet for the Morganza Spillway. Morgan City is home to the International Petroleum Museum where visitors can walk aboard, “Mr. Charlie” an Authentic Offshore Drilling Rig that revolutionized the offshore oil industry. The Museum offers Orientation to Offshore, an eight day program where you can train for an entry level position of roustabout or rigger and secure certifications for FA / CPR, Rigging & Handling Loads Safely, Offshore Water Survival, Confined Space Entry, Reparatory Protection, Lockout / Tagout, Personal Protection Equipment, Hazwoper Awareness, Fire Prevention & Fire Fighting, Rig Pass and/or PEC. Mr. Charles was built at a local shipyard.

For over 24 years, Lavis Law Firm – Personal Injury & Accident Attorney has helped people injured on the job including those injured working at shipyards on mobile drilling rigs and fixed platforms and on land. If you are in a work related injury or hurt in a car accident. 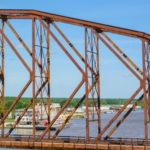 “Mr. Lavis was a tremendous help when I got in a car accident. He took care of everything for me and made sure I was able to see the doctor I wanted to visit. He resolved the matter promptly and made sure to always return my phone calls whenever I had questions. I would definitely recommend Mr. Lavis to my friends and family.”

When the settlement that would eventually be named Morgan City was founded in the mid nineteenth century, residents could not anticipate the geographical significance of the location. Not only was the area located on the banks of the Atchafalaya, but the water that surrounded the settlement covered a rich oil reserve.

Inhabitants of Morgan City (which was renamed from Bashear City in 1876) came to rely upon the nearby waterways as the backbone of their economy. The river and surrounding swamps are home to an abundance of shrimp, the culinary trademark of Morgan City. Constant passage of ships and boats down the Atchafalaya led to the building of a major port, which has brought trade-related capital into the city. Oil was discovered in the late 1800s, and the city began to acquire it in earnest in the mid-20th century. As such, oil, shrimp and port traffic are illustrated as the three major pillars of the economy of Morgan City. The presence of the “Shrimp and Petroleum” festival in the area is indicative of this reliance.

Unfortunately, the economy of Morgan City, being so intrinsically tied to specific industries, has suffered in the wake of several economic events. The oil bust hit the area hard, and there has been a steady decline in the number of oil-related jobs in the past several decades. Individuals who work in the seafood and fishery industry have less to worry about traditional layoffs than those who are in the oil industry, but in the aftermath of the BP Oil Spill and a subsequent (unrelated) overturning of an oil rig in the Morgan City area, their livelihood is directly threatened. There has been some diversification of Morgan City’s economy, and attempts to attract new industries to the area and expand the tourism industry, with some success. Fundamentally, however, Morgan City’s economy and workforce rely upon the presence of oil and fishery related jobs. In an area where the economy is suffering, and sizable percentage of the population is in poverty, it is clear that the oil and seafood industries can no longer sustain the area indefinitely

If you have any questions about your Morgan City, Louisiana legal matter, please give Lavis Law Firm – Personal Injury & Accident Attorney a call at toll free 1-866-558-9151 or submit your inquiry online. We help people recover money from corporations, insurance companies and governments by overcoming problems, hassles and delays.